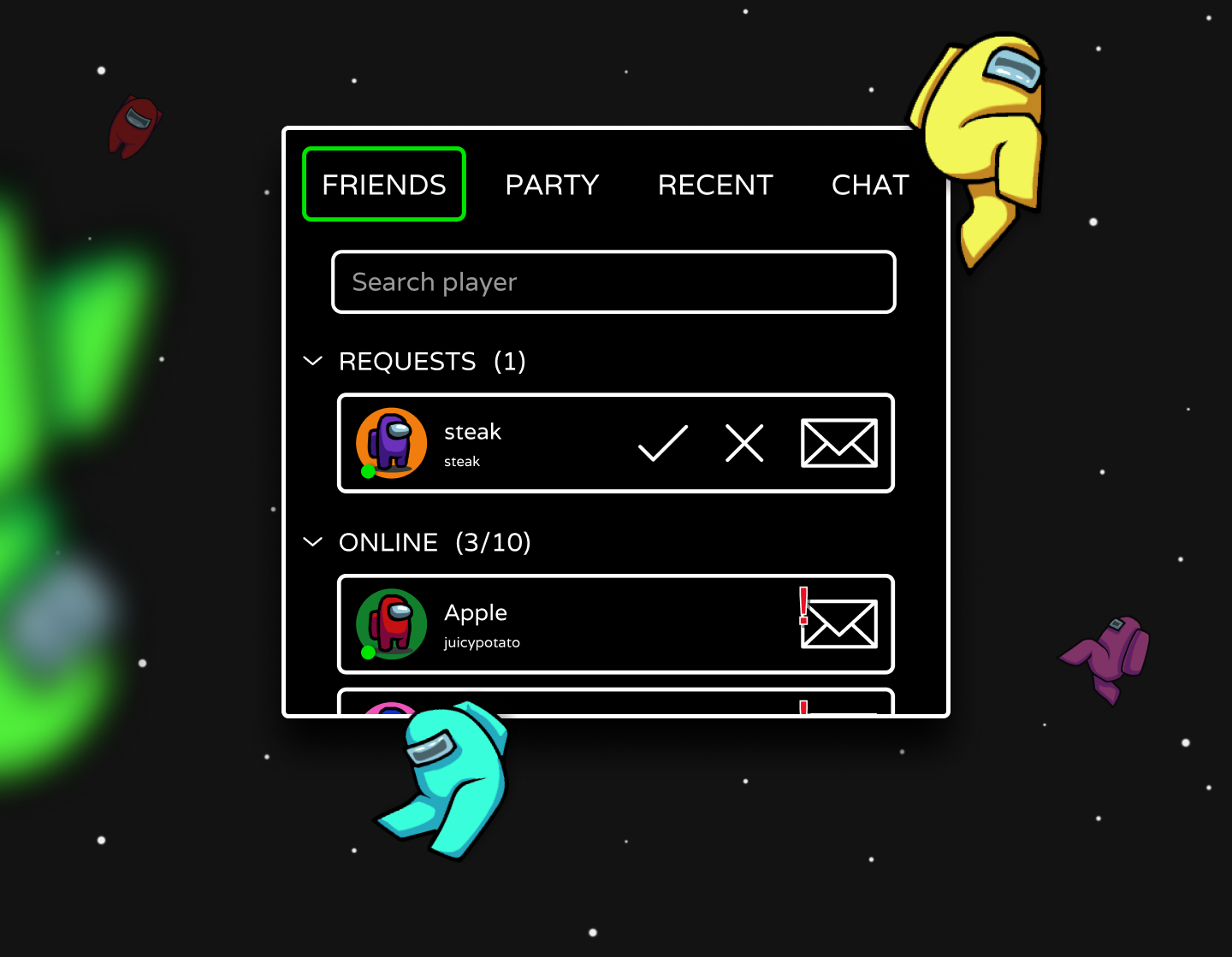 AMONG US FRIENDS SYSTEM

A NEW FEATURE FOR A POPULAR ONLINE MULTIPLAYER GAME.

Among Us is a multiplayer action mystery game created by Innersloth in 2018 for Android, iOS, and Windows. It began as a small game with about 100 players per day. In 2020, due to many being stuck at home and big name streamer influence, Among Us started seeing 200,000 players daily. Creators at Innersloth are focusing on improving and polishing the game by adding features to enhance not only gameplay but also the community aspect.

With a quick influx of players came many requests, one of the top being to implement a friend system so players could connect with each other. Players found themselves playing with others that they wanted to keep in touch with but had no way of doing so unless using a third-party application.

The solution to combat the problem is to design a friend system where players can add, communicate with, and keep track of friends all in game. This is a personal project as a fan of Among Us and has no affiliation with Innersloth. 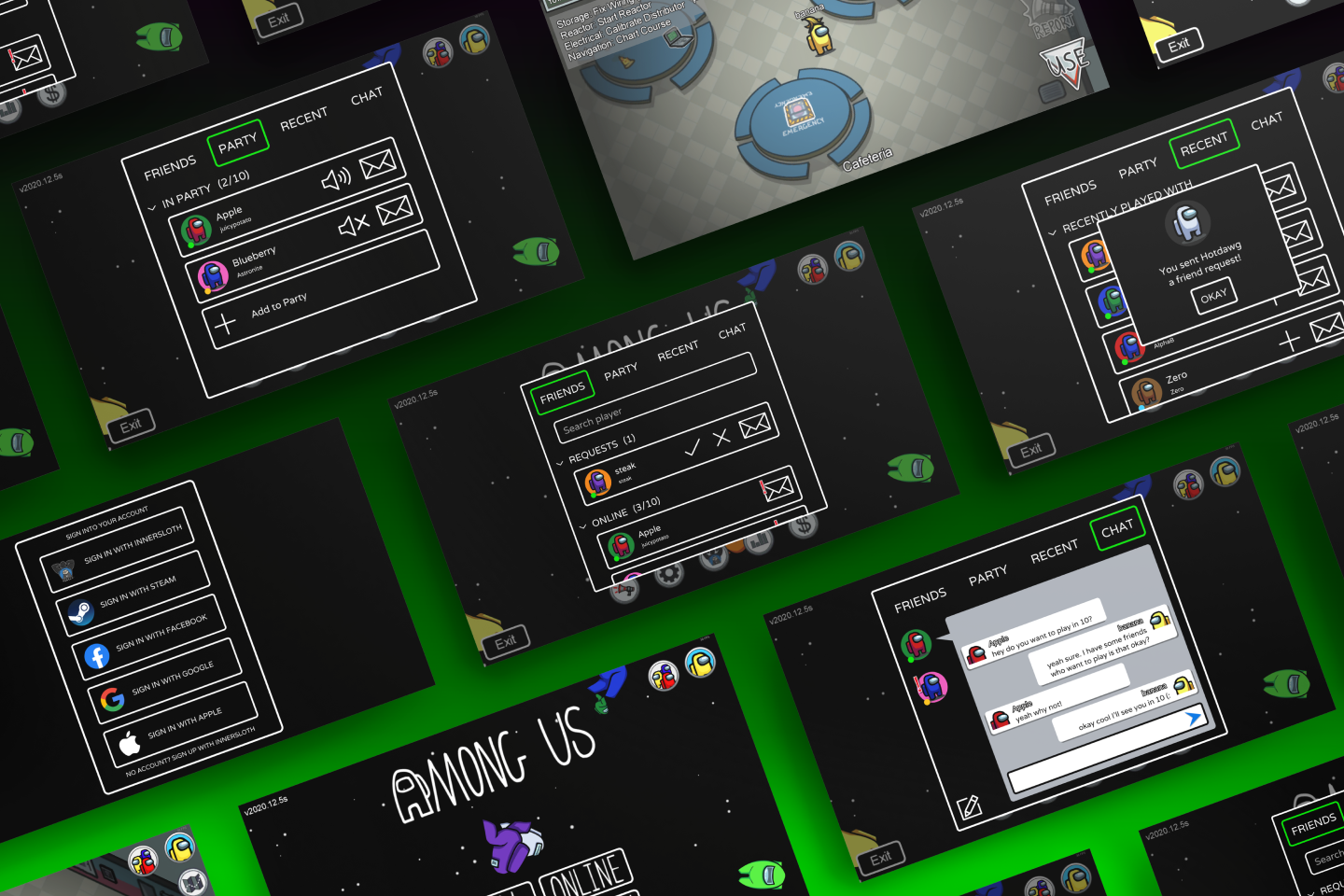 The community of Among Us

At it's core, Among Us is a game centered on community. Communication is a key part of the game as players try to weed out the impostors together through sharing clues and hypotheses. They have to believe in one another to make the right call before blasting someone out into space. So why not allow players to keep in touch even after the game is said and done to build friendships for future games? User research showed that

Most players connect with others online for the socialization

Especially during isolated times, many find that their gaming experience is more exciting by playing with friends. Unfortunately since Among Us does not have an in-game friend system in place players must resort to outside sources to contact each other and set up games. 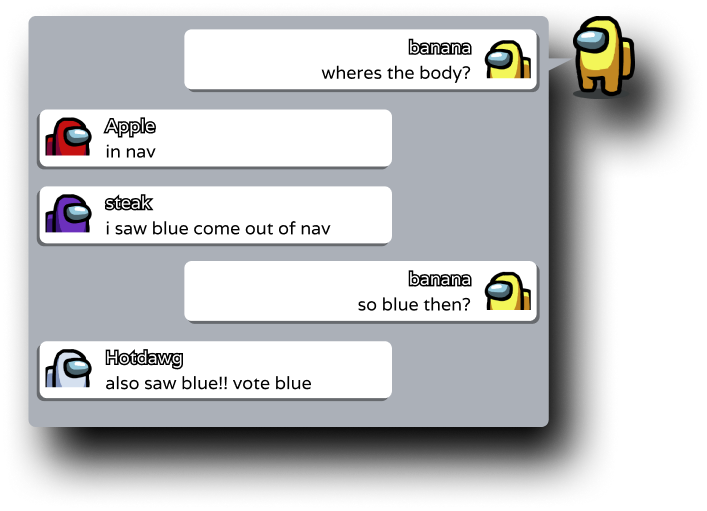 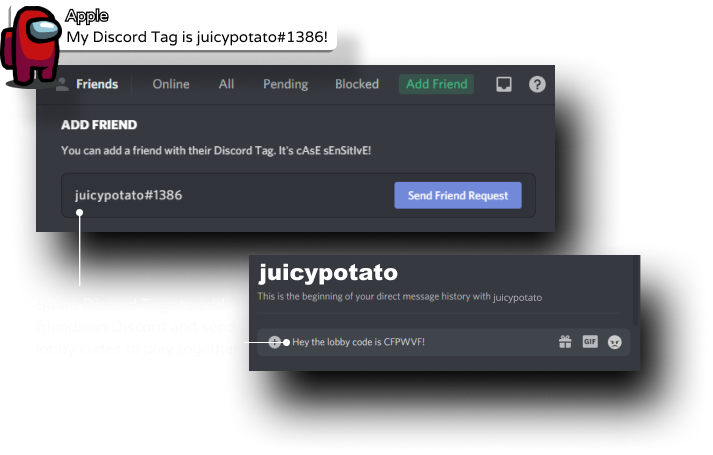 Using Discord to chat outside the game

Enter Discord. Discord is the #1 chat system for gamers that Among Us players typically use to add friends, send lobby codes and utilize voice chat. Players use the public chat in game to send Discord Tags, social media accounts and sometimes personal information such as phone numbers. This can be an unsafe way to invite unwanted guests to players outside accounts and servers, leaving some to search for other means to communicate.

“Help me find my lost friend” with r/AmongUsFriendFinder

A safer way to find friends is through the subreddit "AmongUsFriendFinder", a page dedicated to those looking for others that they lost touch with after the game was over. The page has accumulated over 28k users and sees 20+ posts daily from players looking for their lost friends. This method only requires users to post player names and screenshots, however, the player must depend on others to help them find who they are looking for which can be time consuming and sometimes impossible. 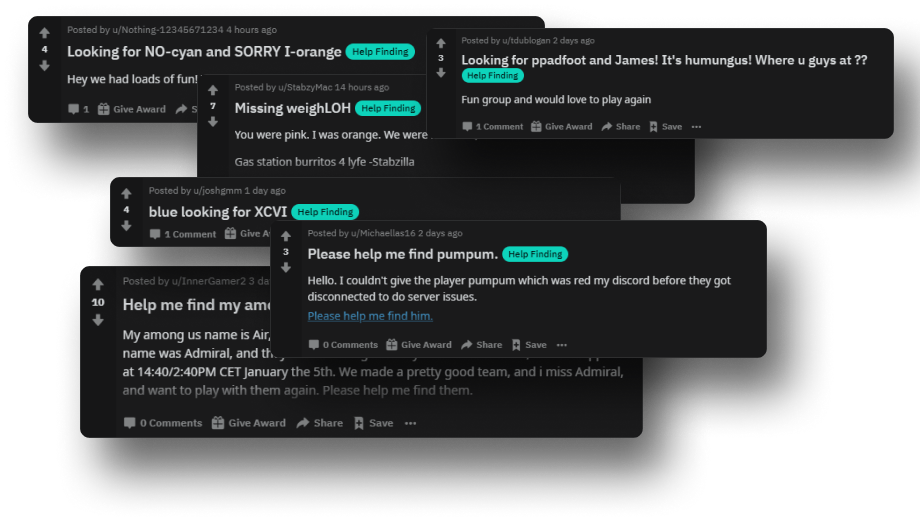 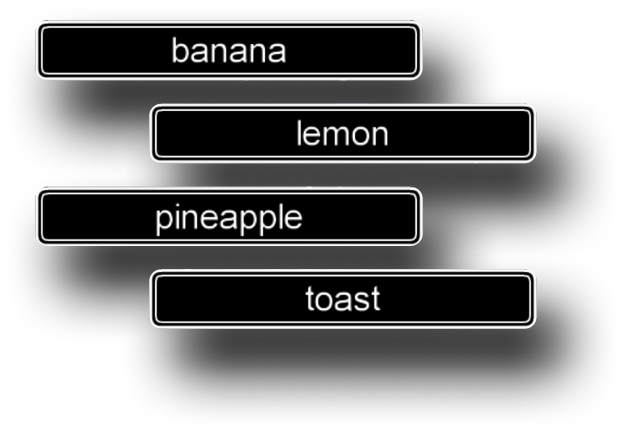 In November of 2020, Innersloth announced the addition of an account system, making it easier to implement a friend system down the road. However, some players are resistant against the idea due to the concern about not being able to change their name before each game, a tactic that some use to avoid suspicion if they get the impostor role. Others fear that adding accounts could create an extra step and take away from the ease and simplistic style of the game. 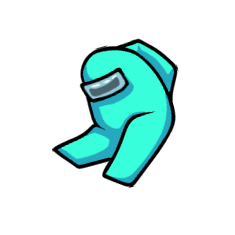 Keeping the DNA of Among Us

Understanding the worry of account systems combined with the intense want for a friend system brought me to reevaluate the task in accordance to how users feel.

How do we add a friend system without disrupting the simplicity of the game?

This question developed a more detailed scope for the project, demonstrating a deeper focus on making a major change while keeping the game simple. The new friend system has to fall in line with industry standards of having accounts and being able to add friends online while also embracing the core design of Among Us.

The flow of the friends system

To get a better idea of how the system will work, a flow of how to use it was created. This demonstrates the navigation of the main component of the system: adding a new friend.

To get a better idea of how others in the industry were implementing social systems, I researched design patterns of games including Overwatch, Fortnite and Smite. Common features included a friends list, recent players, invites, messages, and parties. These became the essential, minimum features for the design. 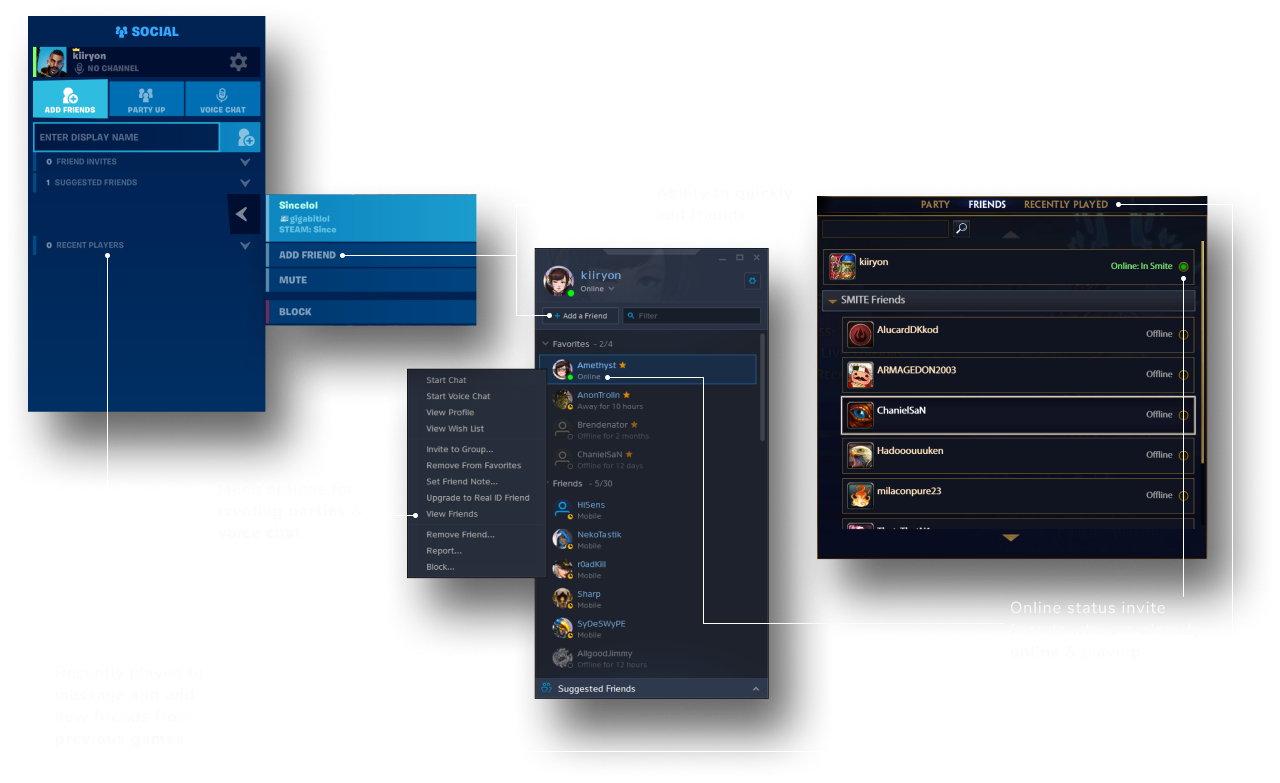 Using inspiration from the industry standards, features such as the friends list, parties, and messages were ideated on before taking a definite direction of which design to go with.

Designing within Among Us standards

Among Us branded its aesthetic with bright, bold, cartoony space characters. But at the end of the day what keeps people around is its simplicity, not only in visuals but in experience as well. I designed multiple screens with this in mind, aiming for the system to be easily accessible, convenient, and recognizable. 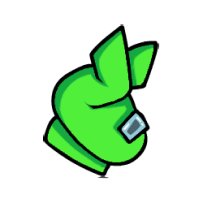 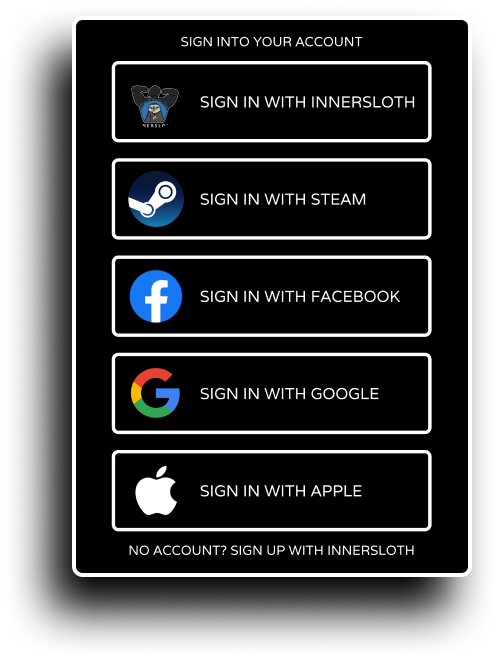 To ease the process of adding an account system, players can choose to link their Among Us account to accounts they already have such as Steam, Google, and Facebook to make it a one stop shop for logins. Doing so will also give the players the option to combine friends lists if both parties have the game. No matter which login is chosen, players will always stay logged in each time they open the game. 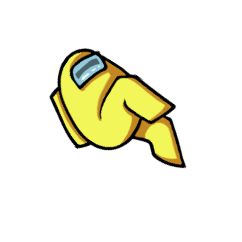 Players can use the friends list to add friends so they don’t get lost in space! The friends menu allows players to search for other players, view their entire friends list, accept friend requests, and see online status of others to make it easier to invite friends who are already online to games. 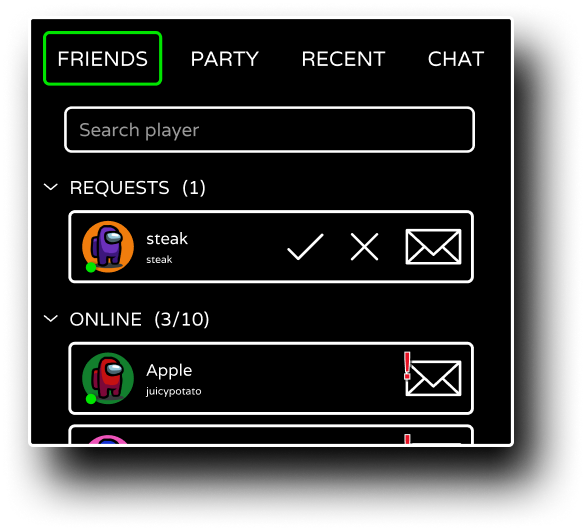 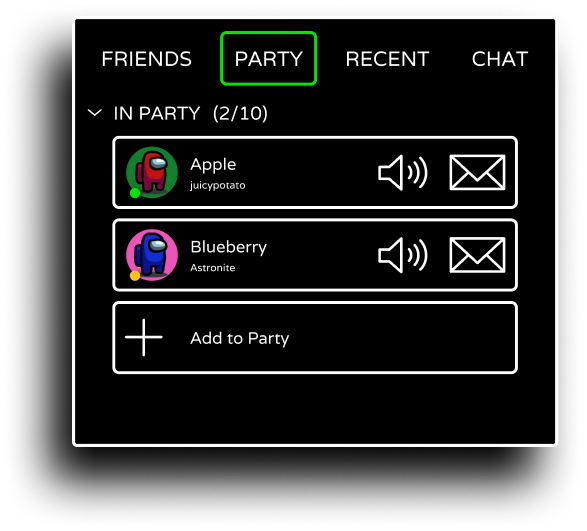 Quickly create a party in-game through the party menu by clicking the “add to party” button that gives the player access to their online friends list. This menu also includes easy access to mic settings and friends profiles. 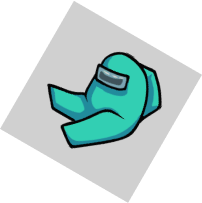 A recent menu shows players who they were most recently in game with as a way to quickly find, add, or message others that are not yet on their friends list. Use this menu to make new friends to play future games with and start a lobby together! 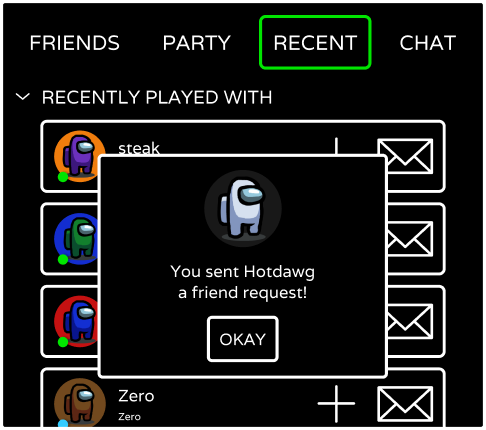 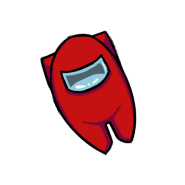 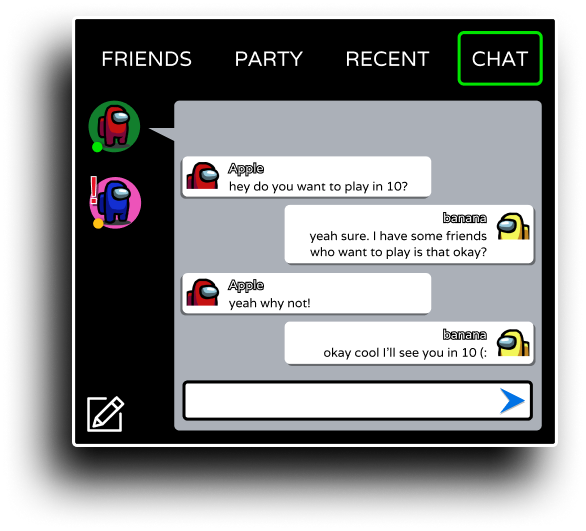 A private messaging system to contact friends and other players. Players can use this to easily set up parties and lobbies right in game or just start a chat to get to know each other and make new friends!

*Chats are not available during gameplay to avoid cheating

Was it really easier to find friends and set up a game?

The new system took players less than 1 minute to add a new friend.

Players also utilized the online status indicator to quickly create parties and join a lobby with those already online, meaning there was no need to open Discord, texting, or social media to contact others outside of the game to play. 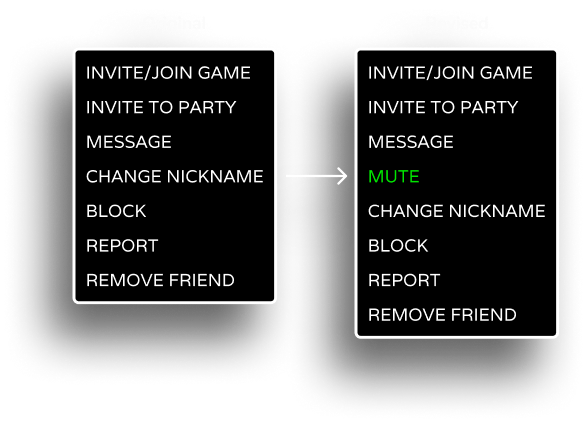 Iterating the menu to include muting

A single error that a few participants encountered was with the "party" tab to mute or unmute voice chat with party members. To make it as simple as possible, the mute/unmute button was added to the pop-up menu so players could mute at any given time, even outside of the party tab.

Research and testing an assumption is vital in the UX field. In this case, what I was hired to do was not exactly what I looked into. The job didn't end up being "how do I make my website look better". But instead it was about researching the client, the customers, and their intentions and motivators. The problem on the surface is not always the key and as a designer it is our job to discover the true issue at hand.

When designing, it is important to be cautious of how decisions will affect the product. New features might bring along a new set of issues. Such as in this case, understanding that a friend system might bring along an unwanted account system. I have to consider what issues might come along with the account systems and design for them now rather than later. 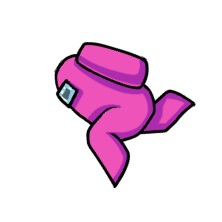